Upset by the statements of the leadership about our one single most important demand of ONE RANK ONE PENSION (OROP) our Association passed a Resolution in our Governing Council Meeting on 21 Aug 2014 and as per the directions of the members it was despatched to the Hon'ble PM with a copy to the Hon'ble RM. A Copy of the Resolution follows this mail.

"It basically wanted the OROP demand should be met by 31 Dec 2014 failing which we shall presume that our respected PM was not satisfied by the sacrifices we have already made for the Nation and he wants more from us. We shall then make more so that he can be won over."

We have received a reply from the MOD which is attached for the information of the fraternity. In short it says -

"The principle of One Rank One Pension for the Armed Forces has been accepted by the Government. The modalities for implementation have been discussed with various stakeholders and are presently under consideration. The same will be implemented once the modalities are finalised." 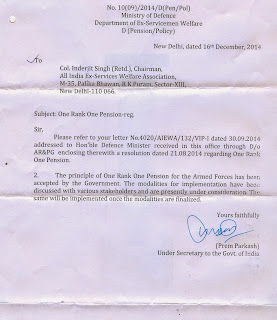 GRANT OF ONE RANK ONE PENSION - RESOLUTION
GENERAL

1. We have been struggling for the last 33 years for the grant of ONE RANK ONE PENSION (OROP) for Veterans. Down the line five Prime Ministers starting with Indiraji had accepted to give it. All their benign gestures to grant the Veterans their rightful dues were however frustrated by the hostile bureaucracy.
Recent Commitments

2. Now the Sixth Prime Minister had announced its acceptance in the Parliament on 17 Feb 2014. The seventh Prime Minister Sh Narendra Modi had given his commitment even before he assumed the charge. After assuming charge he reiterated his commitment through Presidential address to the joint session of the Parliament.
Bureaucratic Opposition
3. The bureaucrats are out to frustrate the commitment of Sh Narendra Modi also. They first produced their own version of OROP, which was rejected with the contempt it deserved. When they were given the correct definition, they worked out Rs 9100.00 crore as expenditure to scare the leadership into reneging from their commitment.
Parting Shot
4. A delegation of Veterans met the Hon'ble RM on 16 Jul 2014. After the meeting when they were leaving, as a parting shot, the Hon'ble RM told them that they should lower their expectations. In other words we should not hope to get true version of OROP. A time has come when unless the Hon'ble PM takes appropriate action he was also likely to fail as his illustrious predecessors.

a) to take matters in his own hands and fulfill his promises made at Rewari to grant OROP to the Veterans on coming to power, as the Bureaucrat who have short changed us for the last thirty three years are not going to let it happen so easily;
b) we further submit that we shall be waiting for its implementation until 31 Dec 2014. If it does not come through we shall know that the Hon'ble Prime Minister, our respected leader, is not satisfied with the sacrifices already made by the veterans for the Nation. We shall then make a few more with the hope that he would be won over into fulfilling his promises.

6. During recent Elections wherever the Hon'ble PM went, he asked the public whether the previous Govt fulfilled their promises to them? When the public answered NO, he told them to throw the Govt out, which they did with a vengeance unheard of before. We are sure that the dedicated and effective leader that he is, he would not allow the bureaucrats to land him in similar situation.
(Inderjit Singh)Lt Col (Retd)Chairman
Posted by All India Ex-Services Welfare Association at 9:17 pm